Giraffes are the tallest terrestrial animals and have a unique and enigmatic appearance. They have a body design that is very different from any others out there. Due to how tall they are it is hard to believe that they can weigh so much. A full grown male giraffe can weigh up to 2,600 pounds while females are quite a bit smaller about 1,800 pounds.

Size
Evidently, the first thing that grabs our attention is the great height they have which oscillates between 15 and 20 feet, being the males higher than females.

Giraffes vary in dimensions according to the gender and the species, but even the smallest are huge for us. As the males have larger dimensions than the females, there is sexual dimorphism in this animal.

The body of the giraffe is relatively little compared to the magnitude of other body parts, but its bone structure supports the substantial weight of its organs and its long neck, which allow it to achieve fast speeds when running.

Their tail is thin and measures from 32 to 40 inches in length.

Ossicones
The strange protuberances that giraffes have on the head similar to horns are called “ossicones” to differentiate them from the antlers of other animals since they are different from these. They are two knobs of an ossified cartilage of approximately 5 inches and covered with fur. These structures are a way of distinguishing genders since those of the females are thinner and with a more hair than those of the males which are thicker and with very little or no fur.

The researchers think that the primary function of these ossicones is related to body thermoregulation, but they are also effective for battles between males.

Some develop a lump on the forehead that has the appearance of a third ossicone, and one species looks like having five of them. It is common for male individuals to grow calcium deposits on the head as they get old which give them this appearance. 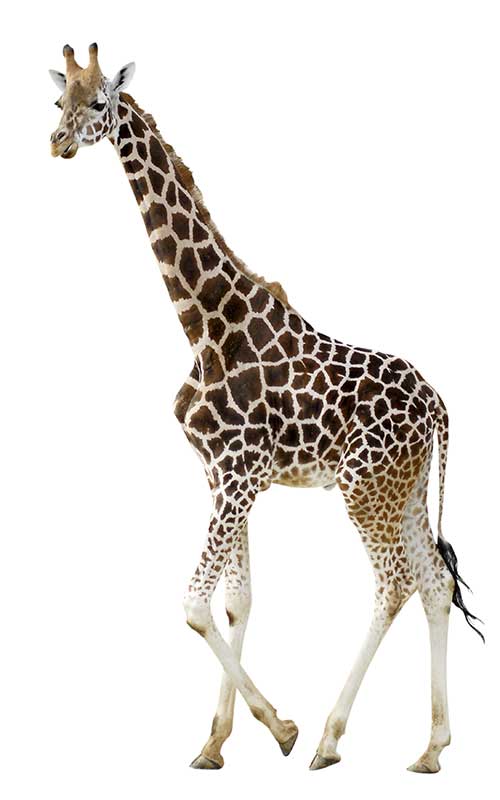 Skin
The coat design of giraffes is one of their most striking features. According to the subspecies, the kind of pattern varies, but besides that, each giraffe has a unique and unrepeatable pattern of spots that get darker with age, but never change their design.

The skin of the giraffes has a characteristic smell that repels insects and parasites and the dark parts also function as a thermoregulation system. Brown, dark orange, light brown and beige are the primary colors in the coats of giraffes.

Head
The head of a giraffe is small and quite long with a rounded mouth at the end of it. They feature little ears that look like those of a deer on the sides of their ossicones.

Face and tongue
The face of giraffes has a friendly and peaceful look. They have big brown eyes with long lashes that protect them from the glare of the sun. Their tongue is prehensile, dark and measures between 18 and 20 inches long. It is used to hold their food and take it to their mouth, as well as to clean their nose. A series of papillae protect the lips, tongue, and interior of the mouth from the dangerous thorns of the plants and trees that giraffes eat, like the Acacia tree.

The extra long and prehensile tongue of the giraffe also helps them to clean bugs off their face as well as to reach very high for food sources in the trees.

The lips of the giraffe are very thick to help protect them during eating. Many of the twigs and trees that they eat have sharp elements that could harm them if they weren’t.

Neck
The long and powerful neck of giraffes is their most characteristic feature, measuring up to 6.5 feet in length and formed by seven cervical vertebrae as in other mammals, including the human being, but with the difference that each of vertebrae has a large size reaching up to 11 inches.

The seven individual vertebrates of the giraffe’s neck have particular joints which give them flexibility. The shoulders of these animals are also robust to hold up that large neck. The two are anchored together through a variety of muscles so that there isn’t strain on the shoulders.

The head and neck of the giraffe are attached to the body by a set of muscles and ligaments that join the long vertebrae, giving the animal a pronounced hump at the start of the neck.

Legs
The legs of a giraffe are very long, thin but incredibly powerful. That is what they use for protection against predators. While they can run up to 35 miles per hour, they can’t do it for very long. What is interesting is that they move both legs on the same side at the same time when walking. However, when galloping, they move the two front legs and then the two back ones.

Stomach
The stomach of the giraffe is also very sophisticated as it has four chambers as all ruminants. They chew the food, regurgitate it, chew it again, and then pass it to the stomach. This organ can digest food very well, so most foods are used positively for the body.

To keep up with this unique anatomy the giraffe also has a very unusual circulatory system. The heart of giraffes is another singularity in the animal world. It has up to 2 feet long and weighs about 24 pounds and can pump 16 to 20 gallons of blood per minute, a size necessary to get the blood all the way up to the brain properly. However, its anatomy also prevents that the brain gets too much blood when they giraffe lowers its head to eat or drink water.

They have teeth adapted to herbivorous feeding, so they cannot use the to defend against other animals or to tear food.

They are not swimmers and getting into the water makes their movements and coordination difficult, but sometimes they need to cross rivers or lakes.