Giraffes and types of Communication

When you ask children what sounds various animals out there make they can often tell you without too much of a hesitation. However if you want to stump them ask what sounds a giraffe makes. Many adults aren’t even sure of this one so it can be a fun way to teach them something new as well.

Giraffes are mostly quiet animals and the majority of their communication takes place on a non-verbal level. However, they do make some noises that have been observed both in the wild and in captivity by researchers. The vocalization of giraffes becomes more prevalent during the mating season. The males will make what appears to be similar to a human coughing in order to attract the attention of females. When you hear a low but constant roaring bellow whistling sound that is a female communicating with her offspring.

For researchers the vocalizations of giraffes are something that still puzzle them in many ways. While they don’t have very many sounds these animals seem to have a system that allows them to effectively communicate with each other on many levels. It is interesting to watch. Most researchers will tell you that a great deal more of observation and learning needs to take place in this area of giraffe research.

The non verbal aspects of giraffe communication that are observed including necking. This has has one meaning, when it is two males it is due to a battle to prove who is stronger. There isn’t any evidence to suggest that two females will engage in this particular behavior.

Sometimes giraffes can be observed making low growling or hissing sounds. This is often to indicate that they are in danger or to ward of others. Mothers are extremely protective of their young. They can also hiss to reprimand their young and to get them to stay close so that they are less likely to be an easy target for predators.

There is plenty of evidence to indicate that giraffes are much smarter than we have given them credit for in the past. It is believed that they are able to rely upon infrasound. This means that the frequency level that they use is well below what the human ear can pick up. It is believed this is why some animals including the giraffe seem to have early warning signs of imminent danger such as natural disasters. 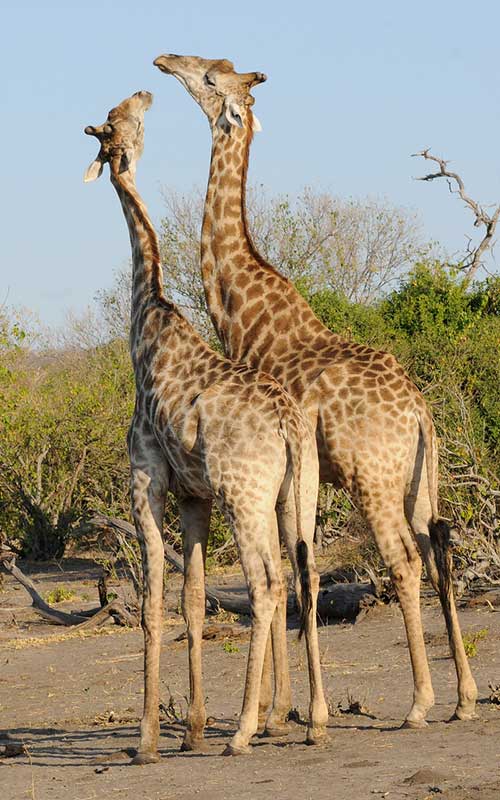 This has put some major holes in the early theory that giraffes are usually silent. It is now thought that they do communicate all the time but that they do so in such low tones that we don’t hear them. Evaluating them though with infrasound is very time consuming and expensive though. Many of the studies used for this record 24 hour periods of time of the giraffe. Then they can review the tapes and use technology to get those sounds that they didn’t hear themselves picked up from the recording.

It is also interesting to note that while giraffes don’t sleep more than a couple of hours a day. As you can see there is still plenty that needs to be evaluated to fully understand the communication process for these animals.