Not all African wildlife is carnivorous and is born to hunt. Large animals that live on this continent feed on nutrients such as vegetation. Elephants, rhinos, and giraffes have an impressive size, and all of them have a diet based on plants.

Giraffes are part of those animals that do not need protein from the meat to survive.

Giraffes are avid eaters when food is plentiful. They prefer to consume what is in the trees including twigs and leaves but also consume a variety of fruits that seasonally grow in the trees. What they eat depends on the time of year and where they inhabit.

The elongated neck of giraffes helps them to reach the leaves of tall trees up to 5 meters height, which no other animal can, except for the elephants and with the aid of their trunk; This is a great advantage for giraffes, as they do not compete for food with other animals. 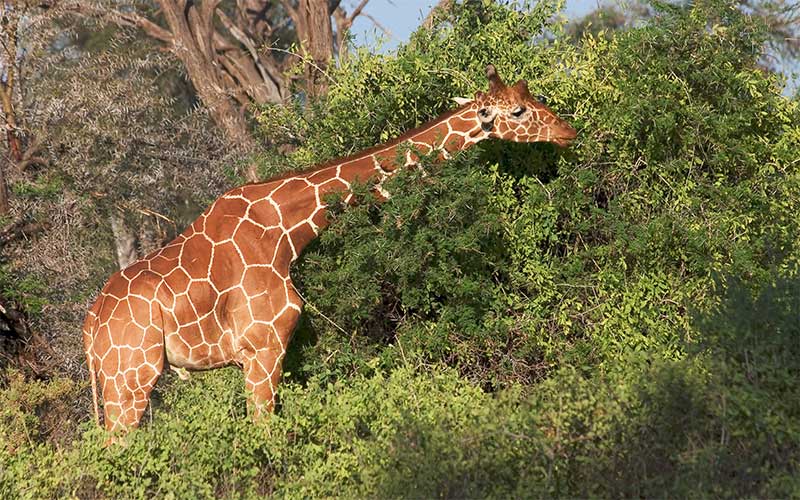 Giraffes don’t have to consume as much foliage as other animals that graze and feed on such a diet because they get the part of the plants that holds the essential nutrients since they can reach high into the trees. They will only feed on the ground when that is scarce although the young will feed on the grass though due to their size. However, they get plenty of nutrients from the milk of their mothers.

Their favorite food is the acacia, a genus of trees and shrubs that are common in their environment, but also they also consume herbs, fruits, seeds and leaves of more than 100 types of plants, depending on the season. When they are under stress, they eat the bark of the branches. 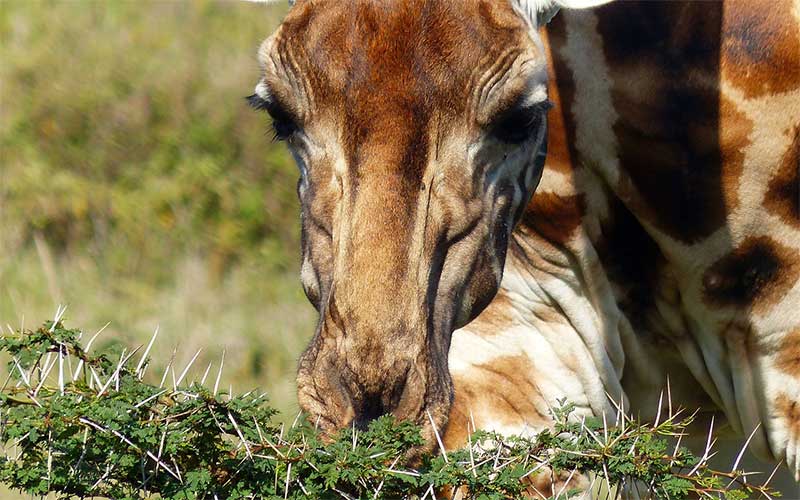 While giraffes are not predators, it has been observed some of them licking bone remains of dead animals and chewing the dry bones for their high calcium content.

In Africa, there is a rainy season which allows giraffes to feed on fruits, leaves, twigs, and water but there is also a drought season when they will try to forage for all that they can, mainly acacia trees and bushes. During this rainy months they eat deciduous plants, and during the dry season, the evergreen plants are more consumed. They eat between 34 and 75 kg of vegetation every day.

The shrubs and trees of African acacias are thorny, but with the help of their tongue, they manage to hold the leaves without hurting, since such prehensile muscle of about 45 cm long has small papillae as well as the mouth, which helps Cushion the sharp elements of trees and shrubs. Similarly, its sticky, thick saliva covers the spines that could swallow, so that they are not in danger of damaging any internal organs of their body.

They are ruminant animals because they have a stomach with four parts that performs a digestive process in a different way than other mammals. The eating process for giraffes is peculiar. They start chewing the food for a few moments and then swallow it. Next, they regurgitate that food into their mouths to chew it a second time. They may do this process before they move on to consume another food; this is a lengthy process which takes giraffes a lot of time feeding each day.

During the rainy season, they get plenty of water from the leaves they consume, but in dry times they drink up to 38 liters of the vital liquid every three days. Drinking water for giraffes is a challenge; Youngs may not have much trouble bending and reaching the water, but adult giraffes require to separate their forelegs wide almost creating a 90-degree angle between both legs so that they can drink, keeping the rear legs in a position just flexed a bit to maintain the balance. It seems that they are about to break, but this part of the body of the giraffes is particularly robust and resistant. 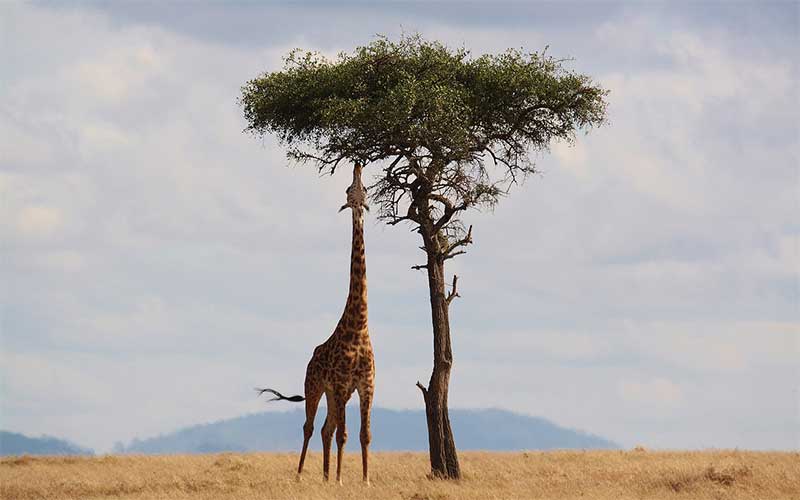 However, this position is very dangerous for giraffes because they are vulnerable and easier to attack, an opportunity that predators usually do not let pass. Crocodiles hiding underwater come out surprisingly, preventing the giraffe from taking back its position and flee, and on land, its neck is at ground level, an occasion that the lurking “big cats” see as an excellent opportunity to attack. That is why giraffes watch around them before they crouch down to drink and take turns watching each other.

They have an internal structure that prevents too much blood from rushing to their head when they are feeding on the ground or drinking water.

Giraffes are common in zoos, to feed them, the personnel supply the acacia leaves and put them in artificial trees or high structures so that they can eat in the usual way. They also feed on carrots and hay.