Giraffes are mammals which go through a reproduction process similar to other animals of the same class but with some characteristics particular to the species.

Reproduction might be the key to the unique appearance and the long neck of giraffes because, through “necking” or battles made with their necks, they determine the strongest male, and the right to mate with a female, which is the most successful bull reproducing.

There is no particular period for the breeding; it can occur in any month of the year. The males emit a strong body odor and smell the urine of the females to know their reproductive status. They show their availability with physical contacts between their front legs and the female’s hind legs. The courting rituals of giraffes involve the chin resting of the male on the back of the female. 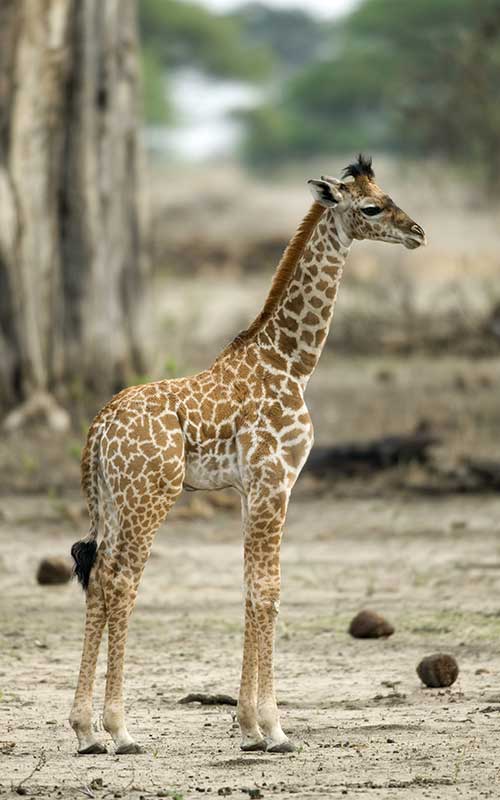 Although giraffes do not have a mating season, it is more common during the rainy season because they are less stressed out and there is plenty of food to consume. When food supplies are very low, and they struggle to survive are less likely to breed. In captivity, they mate throughout the year as they do not have shortages of food or water.

The interval between births is almost two years. Mothers usually move away from the rest of the herd to have their offspring. They return to the same area where they had previous births, and once the little giraffe is born, it stays with the mother to protect it from predators.

The arrival of the giraffes to the world is not the most gentle. After a gestation period ranging from 425 to 465 days, that is approximately 15 months, calves born falling to the ground from almost two meters height from the mother who remains standing up during the birth. However, they do not suffer any hurt, and in a matter of at most 20 minutes, they can walk. The thick sac protecting the calf prevents it from being harmed during the birth process.

Cases of twin births are very rare; The most common is the arrival of a single calf. At birth, they weigh about 150-220 pounds and are approximately 6 feet tall, which they can double in the first year. They begin to drink milk from the moment when they can stand on four legs and stay on their feet.

In the wild, the newborns are a threat to the entire herd as they will attract more predators to the group than normal, which is probably the reason why mothers separate from the group to deliver their offspring.

Calves depend on the mother’s milk for nine to twelve months and begin testing solid foods slowly at about four months of age, at the time they start to ruminate. At the age of four, males have fully developed their horns, but females complete their development until the age of seven.

The first few months of birth are difficult for giraffe calves, as they are very vulnerable to being trapped by predators. Hyenas, lions, wild dogs and leopards target the weakest and young animals like the little giraffes. 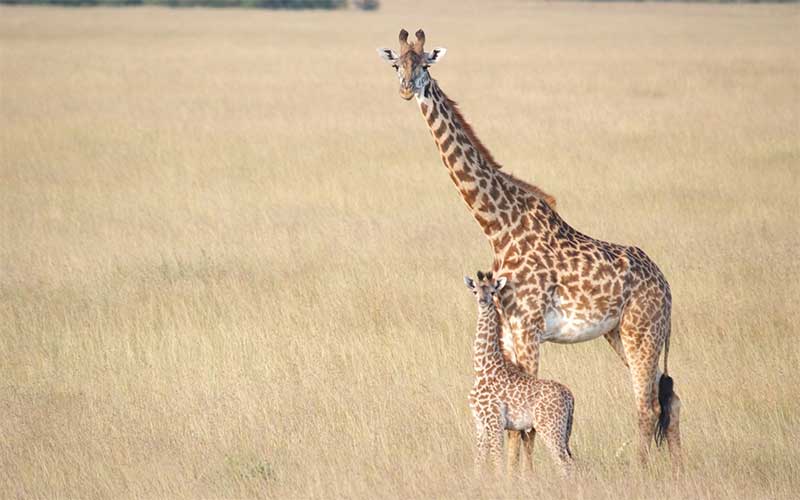 Although they learn to walk within a couple of hours, they get tired very fast, and that makes them vulnerable to predators. For about two weeks the young calves will rest as much as they can while protected by their mothers. Regardless this care, only about 25% of young giraffes make it to adulthood because of predators.

Mothers are very protective and defend their little ones by throwing powerful kicks, but when they have to get food, leave the calf on the ground a few meters from her. Although the vegetation and the color of their skin is an excellent camouflage for giraffes, there are always dangerous predators lurking around.

Once the mother joins the herd again, some members take care of the young while others are looking for food. Most females are already pregnant again while taking care of an offspring, so they spend most of their lives caring for calves. When a calf dies, a mother is deeply disturbed and has been seen trying to move its lifeless body to revive it.

The females reach sexual maturity at an age earlier than males. The former at 4 to 5 years old, while the latter at 7 to 8 years old.

In captivity, giraffes can live a little longer than in the wild, as some individuals have reached the age of 40 years. Females live 25% more than males.

A giraffe mother is very concerned and devoted to its offspring, but in the wild, some have left their calves in the vegetation at the expense of the predators; This is a strange and uncommon behavior not regular of the species.

In zoos, they also exhibit unusual behaviors, such as attacks on their offspring, accidental blows, and neglect to care for them.