Giraffes are social animals that live in unstable herds of 10 to 20 individuals, although they can be up to 50 members. However, they do not have strong social ties like other animal species, except the mothers with their offspring, since each member of the herd can leave the group at will. The herds have females, offspring, young, and some males. Some individuals prefer to stay alone, especially some bulls that are less social than cows.

Observing the social structure of giraffes is interesting. The females bond very well together, so they group in small herds with about 10 to 12 members. There will not be males often in that group unless they are still under the care of their mothers.

To protect their young, females help each other out and form what are called nursery groups to take care of the offspring while mothers alternate watching and eating.

The young males that are old enough to care for themselves, form bachelor herds. They will play with each other, interacting to try to find out who is the strongest and thus the most dominant in the group. For this, they often engage in battles called necking where they contest for a couple of minutes. Similar to a human arm wrestling contest to see who is the stronger party. 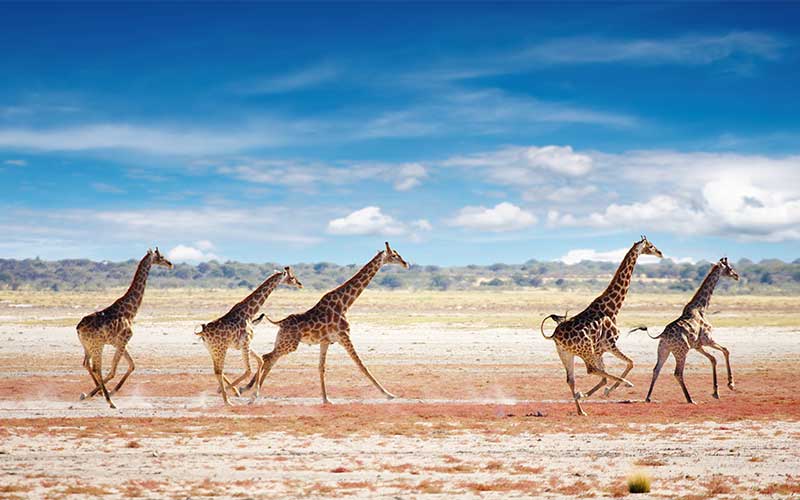 Herd of giraffes in the African savanna, Namibia.

These confrontations are not carried out for territorial reasons since they are not concerned about that, but to select the dominant male and the one that will have more opportunity to mate. They can take several minutes and usually do not end in deaths, but sometimes they can suffer some injuries.

It is possible to say that between males exist certain cordiality, since once they finish the confrontation, they can coexist peacefully in the same territory, unlike other animals where the winner chases the loser until it completely disappears.

Mature males leave their born group and usually spend the rest of their lives alone except when it is time for mating. The dominant adult males have the privilege of mating with an entire herd of giraffes. However, it is very rare when a bull comes in for mating and then leaves again.

Giraffes sometimes gather in large herds, but this is usually two or more groups that are in the same vicinity for feeding.

Do the giraffes vocalize? This question has generated some myths that some people still believe. Perhaps when we have seen giraffes in captivity, we do not hear any sound coming out from them, and we take it for granted that they do not make any.

Giraffes are not a noisy species nor make a particular sound that identifies them like many other animals, but in certain situations, they communicate with sounds. During courtship, males emit some cough-like vocalizations, but both genders have the ability to whistle, moan and communicate through some infrasounds when they are at long distances, which is why we can not always hear them.

Some people who have had the opportunity to listen to their vocalizations assure that they are not very pleasant and it seems that they do not come from those animals so visibly calm. It is similar to the sound of a cow but sharper.

Offspring and young are very loudly when they are in danger; In the presence of a lion, hyena or other threat, they make a series of continuous sounds to grab the attention of the mother. Once the danger is gone, they are silent again.

Nonverbal communication expressed with body movements is important within the herds. The members recognize the dominant male by its posture. When they keep the neck straight, the head upright and the legs firm, they are competing against another bull to measure their level of dominance. When the giraffes are in submission behavior, the head and ears are held down. 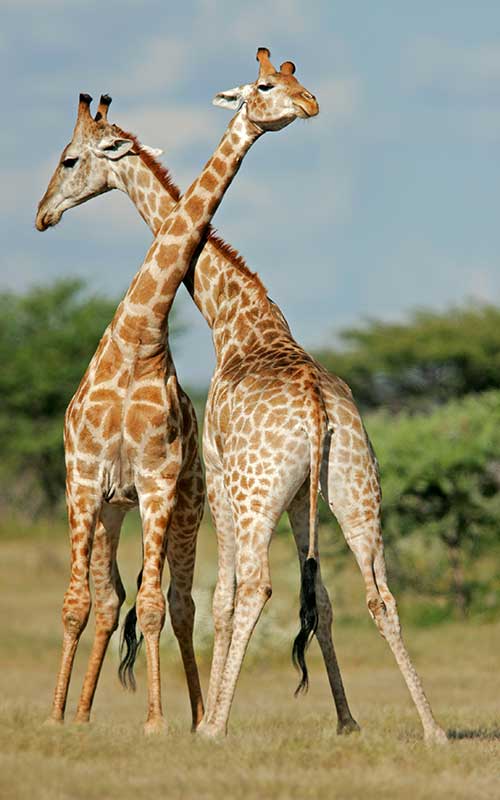 Giraffes prefer to feed in the morning and afternoon hours to have maximum visibility to keep aware of predators. They rest in several positions, sometimes they just stand still, while others they lie on the ground with their four legs bent and their heads straight watching around. Another posture that is very peculiar is common in the young, they let the whole body rest on the floor and to relax the neck they take it back by supporting it on one of their hind legs. It seems that they are totally uncomfortable or crooked, but that is the curious way in which they rest to recover energy.

Giraffes aren’t territorial, but males become that way when they want to mate to keep other males away from the females they plan to courtship and mate. Also, they can be more territorial when the food is scarce, and they have to fight to keep their herd together.

In captivity, both males and females live in the same areas. However, you will notice that they keep their distance. While they are tolerant of each other, they keep to their elements as they would in the wild. It has been noted both in the wild and in captivity that the loose social structure of the giraffe allows it to change and to adapt as it needs to.

When food is scarce, it is common that large herds split and travel on their own to ensure that they do not completely deplete the food sources in a given area.

Many experts believe that this lack of social structure helps giraffes to adapt and survive in the wild. They also think that this makes the transition to captivity less stressful so they can live relaxed in zoos.