All species of giraffes are native to Africa and belong to the order of even-toed ungulate mammals known as artiodactyls, which also includes deer, goats or camels, to name a few. They also belong to the family Giraffidae being their closest relative the Okapi, an animal similar to their ancestors with anatomical features very similar to the current giraffes and zebras.

The Giraffidae family developed from ungulates in the early Miocene; That is, about 25 million years ago. Such family includes two Genera, the Giraffa and the Okapia. As evident, the former includes the four species of giraffes while the latter only includes the Okapi (Okapia johnstoni) which is the only extant species today.

Giraffes are ruminants, and they are the tallest animals on Earth, although one of the species is the first place in this category.

There are four species, six subspecies and one ecotype of giraffes that are native to more than 15 African countries. Although each has distinct fur patterns and different heights, they are not easy to identify, especially if we consider that their type of habitat and reproductive or feeding habits are very similar.

The differences that are noted include where they live, the coloring, and even the types of patterns that they have on their coats. The distribution ranges of some species overlap. They may even share a given area, but they do not often interact with each other.

The Northern giraffe (Giraffa camelopardis) have four subspecies which are among the best known. Regardless they are the same species; each subspecies has a very distinctive fur pattern that makes them easy to identify.

The Kordofan giraffe, (Giraffa camelopardalis antiquorum) is perhaps the shortest species with a height between 3.8 and 4.7 meters, which still are relevant dimensions. It has patterns of irregular spots with different sizes that in younger individuals appear with colors less intense than in the adults. The savannas of Kenya and Uganda are part of their natural habitat.

The Rothschild’s giraffe (Giraffa camelopardalis rothschildi) is another subspecies of the Northern giraffe and has a fur with a beige background and brown patches whose center shows other much darker spots. These patches are irregular and separated from each other, which helps to differentiate it from other types of giraffes.

The second species, The reticulated giraffe (Giraffa reticulata) is one of the most identifiable. They reach a height of four or five meters and have a fur pattern with sharp edges, slightly separated from each other, which produces very narrow white lines and a puzzle aspect. It inhabits the rainforests and savannas of Kenya, Ethiopia, and Somalia.

The Masai giraffe (Giraffa camelopardalis tippelskirchi) is the tallest animal on Earth with a height of six meters, and coat with spots of two shades of brown very similar to oak leaves on a yellowish background. Currently, they only inhabit the natural landscapes of Kenya and Tanzania.

The West African Giraffe is a common type of giraffe that you will see in zoos. They are also commonly referred to as the Nigerian giraffes.

Giraffes have ancestors that today only exist in the history books and museums.

Fossil discoveries revealed the existence of a genus that lived 8,000 years ago that had a medium-sized anatomy. We are talking about Sivatherium. The fossil remains indicate that the individuals of this species had a height around 3 meters and a weight of 500 kg.

The genus Giraffokeryx lived in Eurasia and had four ossicones in its head and medium height.

Palaeotragus was one of the largest genera of primitive Okapis that lived in Africa, Asia, and Europe in the Miocene era. They had ossicones like giraffes and reached about six feet high.

There is not a conservation status available for all species and subspecies, but the species assessed are: 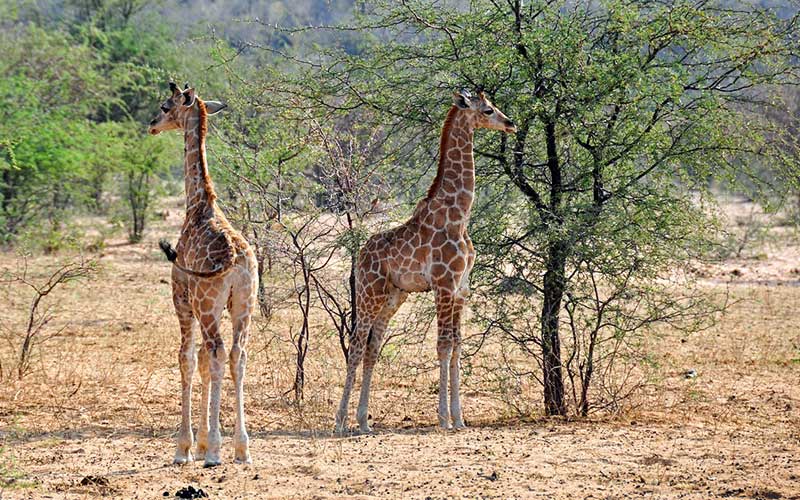 The populations located in the south of the continent have had a positive response to conservation and preservation actions, as they are increasing, but it is not the same for the northern species.

In general, populations have declined alarmingly due to poaching and degradation of their natural habitat. It is estimated that some populations only have a few thousand members when several years ago they were prolific in any region of Africa, and it was very common to watch them.

It also seems that other herbivores look to keep close to giraffes as their ability to see at higher levels than others warn other with anticipation about possible dangers. Also, probably because they can hear the low frequencies that giraffes emit, so they pick up on danger sooner than other animals.