Our ancestors had contact with giraffes as some cave paintings confirm it. In countries like Namibia, there are cave walls with drawings where you can clearly see the figures of giraffes and other local fauna. The paintings are very well detailed, as you can see the proportion of the long neck compared to the rest of the body.

In the year 2500 B.C., several giraffes were captured in sub-Saharan regions and later transferred to Egypt in rafts on the Nile river. At that time it was customary to foster political relations through extraordinary and unique gifts, to attract the leaders of other lands and thus obtain benefits or start trading, so they considered the giraffe as an excellent and exotic gift.

Another “gift” of that kind was the one that Muhammad Ali of Egypt gave to Charles X of France. A giraffe was moved from Egypt to Paris at the beginning of the 19th century as a sign of respect, warmth, and camaraderie between the two countries. The animal caused sensation and curiosity among the population since they were amazed by such large animal.

The Roman general Julius Caesar took the first giraffe to Rome and had it in his personal zoo. He called it “cameleopard” because of its height similar to that of a camel and its brown spots that reminded him a leopard. The rumor spread among the population, that the giraffes were as aggressive as such big cat, thinking that they would be in the Roman Coliseum, but later the rumor was denied.

Later when the empires of Rome and Egypt were in decadence, the giraffes disappeared from Europe, but they stayed in the imagination of the people. In Egypt, the fact that someone dreamed of a giraffe meant that something bad was going to happen very soon.

During the 20th-century transporting giraffes was an easier task, reason why they began to populate other parts of the world in captivity. In 1926 a giraffe was taken to a zoo in France and caused a furor in women’s fashion since in that nation that industry was very influential in society and therefore the stamping of brown spots became the trend of the moment.

Humans and giraffes have a different type of relationship than that of many other animals. Giraffes have never served a significant purpose for people, yet they haven’t been seen as a threat either. Many people are quite fascinated by them which is why they take such an interest in them. They love the gentleness as well as the fact that they are so different from other animals out there.

Giraffes often attract the attention when they are in captivity. It seems that young and old alike are happy to observe them and delighted to be so near these unusual animals. However, what goes on with them in the wild is usually another story. It is a situation that most of us aren’t aware of and has grim details.

Many people are quite surprised to learn that hunting a giraffe is a common practice in Africa. These are considered to be exotic animals to some people, and so part of the thrill to them with hunting is that they can get an animal that most others never will.

Killing giraffes is not a recent activity. European hunters of the nineteenth and twentieth centuries who explored regions of Africa targeted lions, leopards, water buffaloes and giraffes for their private collections. Such activity got so common that the giraffes were on the brink of extinction.

Guided hunts in Africa can bring in quite a bit of money for villagers that live in severe poverty, however, as usual, they do not get most of the money. In addition to hunting giraffes for sport, they are often killed to collect and sell their tails and coats. Tails are considered effective fly swatters and catch insects that can be a danger to human health. Locals also believed that a tail served as an amulet to ward off evil spirits and attract good luck. 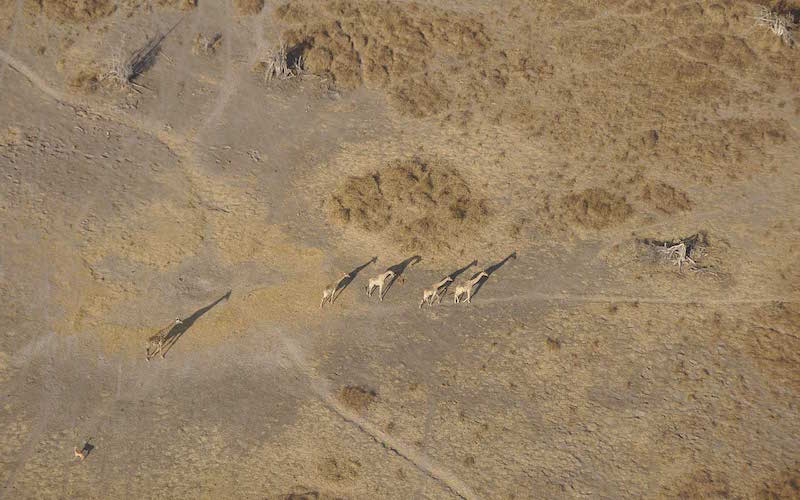 Aerial view of giraffes in their natural habitat.

In some areas of Africa, people kill giraffes to consume their meat. This particular type of meat isn’t nearly as good tasting or nutritionally as other animals. However, in the areas where we are talking about survival, people will take any source of meat that they can get.

Native people of Kenya, Sudan, and Ethiopia valued the meat, skin, and tails of giraffes and hunted them for survival. They also used the bones, crushed to use as fertilizers.

The destruction of the areas where giraffes live is a common problem for them. When trees are cut down, then they don’t have as much to choose from when it comes to sources of food.

In some regions where giraffes live, the habitat is continuously destroyed to obtain firewood and grazing lands, which has led to deforestation. The presence of giraffes in Africa continues decreasing because of this and their distribution range now is very limited, and some species and subspecies are at risk of extinction.

Most people is happy to see giraffes, but what you see in a zoo is just one setting for them to live in so it is important to expand your knowledge about the different forms of interactions that humans have with them.

Many researchers have conducted some basic studies on giraffes, but there is plenty still to unlock about their lives and communication. There isn’t too much to piece together yet about their evolution process either. Humans and giraffes seem to be able to live somewhat in balance but do keep in mind that humans have to stop destroying their natural habitat so that they won’t end up extinct like so many other animals in the world.