In several African countries, populations of giraffes that use to live there no longer inhabit such places. Its future is at risk mainly because of human activities.

In only ten years, the reticulated giraffe has reduced its number of individuals up to 80% because of poaching; This is just one of many examples of the distressing situation that they are experiencing. While some do not support the idea of moving the giraffes to safe places in captivity, others believe that it is the only solution to these alarming killing rates.

The natural habitat of the giraffes has several types of plants, among them trees and shrubs. If we compare that to the conditions they have in captivity, is very upsetting. Keeping animals in captivity has always divided opinions that highlight negative and positive aspects for doing this.

Giraffes are found in zoos all over the world. They are animals that attract the attention of the visitors and that are relatively easy to manage. They are very gentle with people, so they often have enclosures that allow people to come right up to them. One zoo in particular to see them is the Cheyenne Mountain Zoo in Colorado.

There are also fewer restrictions on approaching the area of giraffes compared to other animals.

In zoos, giraffes are the animals preferred by children, because of their peaceful and noble character; also, the appeal of its anatomy captures the attention. There are also fewer restrictions on approaching the area of giraffes compared to other animals, so it is more likely that they can be appreciated more. They are always present to watch because they can not “hide” between the elements of the zoo compared to other types of fauna that rest in caves and other artificial constructions at certain times of the day.

In such facilities, they feed the giraffes on carrots, apples, seeds, leaves and various types of vegetation that although is placed on the top of artificial “trees” to resemble their feeding habits, it is food that is not available in their natural habitat.

Some zoos keep giraffes in tiny spaces, which draws the attention of conservation groups that consider this an abuse and ask for their release. Sometimes this is challenging because some of them were born in captivity and the zoo is the only place they know, so releasing them would be unlikely.

It is important, of course, that these facilities have safety and welfare standards for all the animals.

Several zoos have sparked controversies, and an example happened in 2014 at the Copenhagen Zoo, Denmark, when a beautiful young giraffe was sacrificed to avoid inbreeding, arguing that if left alive the possibility to transmit harmful genes to offspring would increase damaging the preservation of the purity as a species. This fact aroused the repudiation of many people around the world, who protested against such action, for them unjustified. 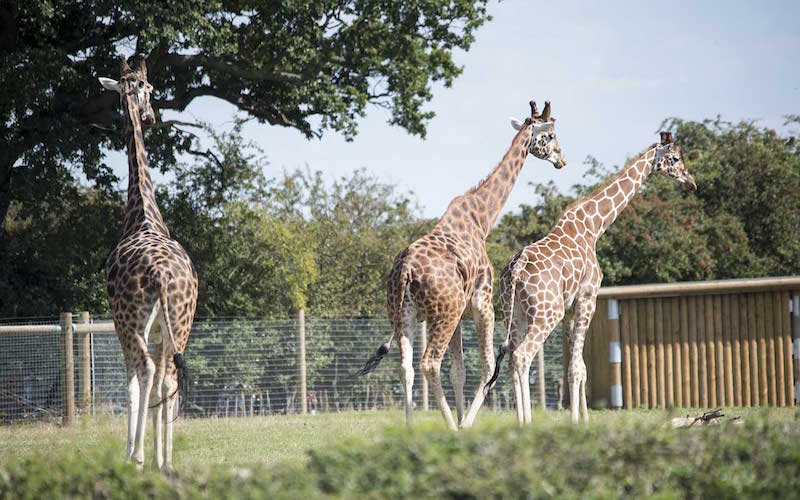 Giraffes at the zoo.

Some national parks also suffer from human invasion and laws are not enforced, so it would not guarantee their survival.

However, with a natural environment threatened by poaching and habitat destruction, an artificial environment is all that can save some of them. Subsequently, experts can create plans to reintroduce them to safer places and supplied with everything they need to survive.

There are always arguments again keeping giraffes in captivity because they are among a group of animals that change behaviors so they do things in captivity that they normally do not do in the wild. For the giraffes, it has to do with the use of their tongues all the time.

Also, being fed by humans with foods that aren’t from trees is part of this. They have a need in the wild to use their long tongues for feeding and drinking so in captivity they need to do things with it to keep it occupied.

Many people wonder what the diet is for giraffes in captivity as they don’t have access to grass, twigs, leaves, and fruits from the trees. Instead, they have a diet that has been carefully balanced to provide them the level of nutrients their bodies need. The food includes alfalfa, hay, pellets that have additional vitamins in them, crackers with plenty of grain and even tree bark in them, and fresh fruits and vegetables. Their favorites are apples, bananas, and carrots.

The life span for giraffes in captivity isn’t increased much. About 32-40 years.

The life span for giraffes in captivity isn’t increased much though. In the wild, they can live from 15 to 25 years. In captivity that increases to about 32-40 years. The biggest change here is that the young have a better chance of living to adulthood. In the wild approximately half of them will be killed in their first year of life by predators. In captivity, they can become adults and have offspring themselves.

Others die in the wild due to parasites that develop in the water. Giraffes consume lots of water at once which is why they are so harshly affected by it. The water is devoid of such problems in captivity, so they do not die from this kind of diseases in zoos. They are also carefully monitored for any health concerns to give them the very best life possible while in captivity.

You may notice giraffes laying down quite a bit in captivity, and many are concerned about that. They don’t do it nearly as often in the wild because it is extremely time-consuming for them to get to their feet. They would have no chance to do so before a predator could spring on them.

However, in captivity, they don’t have the instinct to stay away from predators because those risks don’t exist. They take the time to fold their legs under their body carefully, but they also keep their head in an upright position. In most locations where they are in captivity, they have the ability to come up to people and even to consume food out of their hands.