The Masai giraffe, also known as Kilimanjaro giraffe is a remarkable species that is not only the largest giraffe but also the highest terrestrial animal in the world.

It is part of the Giraffidae family, described for the first time in 1898. Its scientific name is in honor of Herr von Tippelskirch, who was a member of a German scientific expedition to East Africa that took information and skin samples back to Europe for the first time.

The Masai Giraffe is powerful due to the design of the legs and the hooves. Most predators avoid adults because one swift kick can kill them.

Adult males reach a height of up to 19.5 feet, and females are not much smaller because they reach between 16 and 18 feet. Their legs are about two meters long, like the neck, which is internally formed by seven long vertebrae and externally shows a mane all the way down it. Their body is also massive and weighs up to three tons. Males can weigh from 2,000 to 3,000 pounds while females can weigh from 1,300 to 2,000 pounds.

Their feet measure approximately 12 inches in length and their tongue 18 to 20 inches. Its tail is the longest of all terrestrial animals, measuring up to 3.3 feet in length. The heart of a Masai weighs 25 pounds on average and pumps 60 liters of blood per minute. The extension of their extremities, allows them to reach great speeds of up to 35 mph when they run.

The spots on this particular species of giraffe are jagged compared to the others. While the males have darker spots than the females with age, the dominant male have the darkest of all, and it may not be that way when he first steps into his role. It is unknown what results in this physical change.

Compared to other species and subspecies that do not have the distinctive patches on the legs, or that start fading below the knees, the Masai giraffes have them completely covering the limbs.The leg part at the bottom of them is very skinny and stick like in appearance. This thin leg bone has to be incredibly sturdy to support the weight of a huge animal like this.

It is possible to differentiate the Masai giraffe from the other species mainly by the design of its fur “stamped” with irregular patches, which are darker in the dominant males, but generally, they are of brown with several shades of such color. Its skin resembles a group of dried oak leaves arranged on a background that can have several shades of a lighter color, like orange or cream.

As they age, males can develop calcium deposits in their skulls, which gives them the appearance of having more ossicones. When they are young, the males have such ossicones more developed than the females, who have them thinner and covered with hair.

The anatomy of the neck is very peculiar as it has valves that work in a way that when a giraffe bends over for water, they don’t suffer brain damage due to blood rushing to the head area.

As all giraffe species, the Masai giraffes are native to the African continent, specifically to the savannas at the center and south of Kenya, as well as Tanzania. The Rhodesian giraffe, an ecotype of the Masai giraffe, inhabits only the Luangwa Valley in Zambia. Rwanda also has a few relocated specimens. 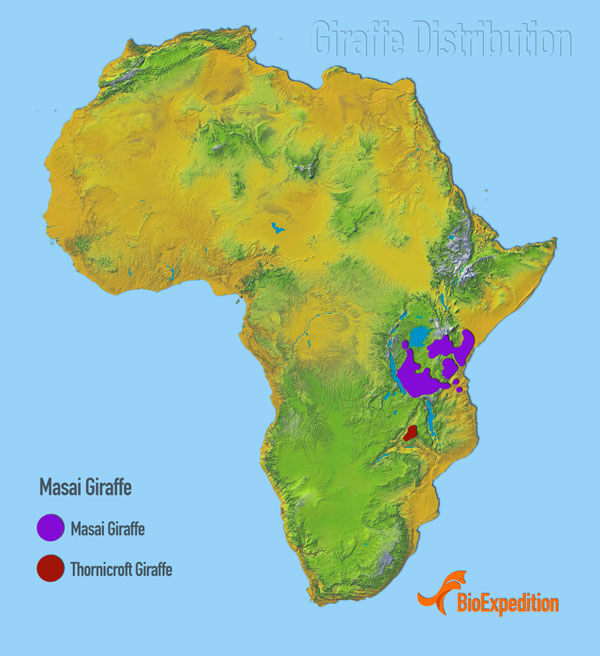 The Masai Giraffes live in herds that are quite smaller. They seem to be very tolerant of each other for the most part, especially the females. The males tend to be aggressive only when it involves dominating the group or for mating rights and they do not often interact unless they are looking to mate.

They move around through a home territory that can span more than 50 miles. They aren’t territorial as far as other animals or other herds of giraffes being in the same location as them. They seem to form strong bonds within their herds, in particular between the females.

The Masai Giraffes spend most hours in a day feeding. They are grazers and can spend from 16 to 20 hours every single day out there eating or looking for food. Thankfully, these animals only need to sleep short time in a span of 24 hours, and they often do it for small periods of time.

They eat about 75 pounds of food every day and take their time to chew it because they do not fill their mouths with much vegetation, besides their mouths are small compared with the size of their body. However, they take in small amounts each time and slowly ingest it.

The leaves of the acacia tree are their favorite, and although they have dangerous thorns, they manage to swallow them with the aid of their long tongue and the thick protective saliva they produce. Because they get lots of water from the leaves, they can spend several days without drinking, but when needed, they take up to 10 gallons of water in a day. Their diverse diet that is entirely made up of vegetation including twigs, seasonal fruits, flowers, and naturally Acacia leaves.

When feeding, the males feed on the very top branches while the females at the lower branches. These giraffes live in an area where their food has more water in it than others. That means they can go for several days without water.

The Masai Giraffe reach sexual maturity between three and five years of age. Most males never mate until they are at least seven years old because they have to earn that right fighting with other bulls. This dominance display is performed hitting their necks around each other. These battles called “necking” can go on for 30-60 min. 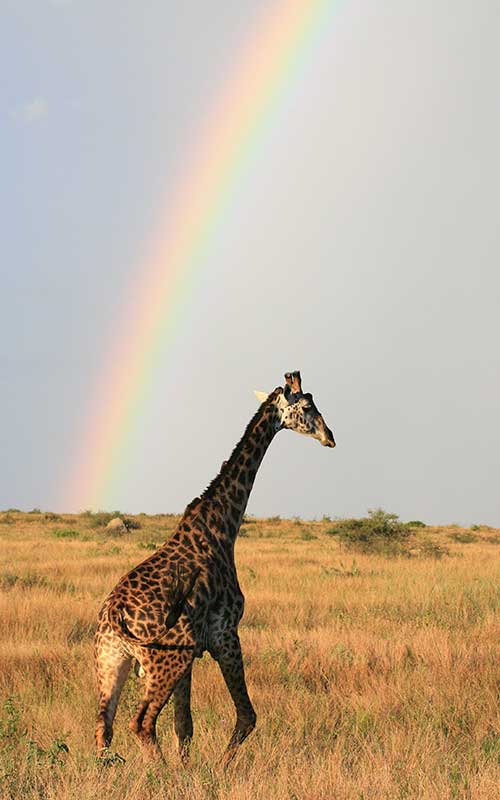 The gestation lasts about 14 months. At birth the head of the calf comes out first, followed by the front legs and then the rest of the body. The offspring falls to the ground from the mother’s womb which may seem a painful way to arrive the world, but they are ready to such conditions, and they do not suffer any injury during the delivery. The full birth lasts two to six hours, and the calf is about 6 feet tall at birth and can be up to 200 pounds in weight. In about twenty minutes or an hour, they can walk.

Masai mothers are very protective and throw powerful kicks to keep predators away from their helpless offspring. Those blows with the legs can break the skull or spine of an animal as big as a lion, although the luck of the giraffe can change if it is a large herd.

The mortality rate for the young Masai Giraffes is as much as 75% during the first few months of life. Those young that survive that first couple of months will then join the herd. A kind of nursery exists to take care of the young with the mothers taking turns watching out while the others feed. The young consume milk from their mothers for about the first year of life.

The evolution of this species of giraffe isn’t entirely known, but we have information that links them to the families of deer. There are theories about the long neck being an evolution solution for them to get to food higher up than other animals. Some experts believe this is a genetic factor that developed first and then it let those with it survive when others couldn’t reach the food sources.

The primary predators of these giraffes are lions and hyenas. They usually do not target full grown adults due to their powerful legs and sharp hooves, but they are a great danger for the young.

Although they can camouflage with the environment because of the color of their spots, they are always at risk from the hunting techniques of their natural predators. Lions, spotted hyenas and leopards target the offspring and wounded giraffes, but the first two predators are capable of knocking down an unaware adult if they are organized in a herd and attack various parts of the body at the same time.

There is a high percentage of predation to newborns and very young members; we are talking about 50 to 75% of deaths during the first months of their life.

Regarding anthropogenic threats, this species is classified as “Vulnerable” because in the last decades its population has fallen by up to 52% mainly by poaching. Their protection in captivity has caused controversy, but the females have shown a positive response to mating and births have occurred successfully wich in some way, helps to the conservation of the species.