It is also known as the Somali giraffe, and it also has a unique skin design, which makes it perhaps the easiest to identify from all the species of giraffe.

The Reticulated Giraffe is the most common in zoos around the world, so chances are you have seen one of them up close. They have a coat with large spots, and between them, there are lines which can be white or cream in color.

The anatomy of the giraffe is amazing if you consider they have a heart that weighs about 25 pounds, four chambers to the stomach, and valves that turn off the flow of blood to their necks when they bend down. Their body anatomy is no much different from other species except for the coat and size. They are slightly smaller in height and weight. They can move at a pace of 35 miles per hour when they gallop.

They have a height of 13 to 16 feet and a weight of around 2,600 pounds. The spots on their coat are very well defined and have a uniform brown color. They cover most of their body, including the face and tail, and the separation between them are narrow, and well-delineated white gaps, resulting in a coat that resembles polygonal figures.

From the knees down, those brown marks fade to be completely white and get lost with the background of the same color. The same thing happens in the ventral zone. Like all species and subspecies, they have a short, vertical mane on the neck from the head to the hump.

Its neck contains seven vertebrae just like humans, but the length of each one is what makes its elongated feature. Their blood pressure is regulated and adapts to sudden changes in their movements, such as when they are drinking water.

This species occupied much of the African continent several decades ago, but nowadays they live in open forests, dry savannahs, rainforests and plains of Kenya, Ethiopia and Somalia.

The primary location where you can find the Reticulated Giraffe is in southwest Somalia the Northern part of Kenya as well as a Southern portion of Ethiopia. 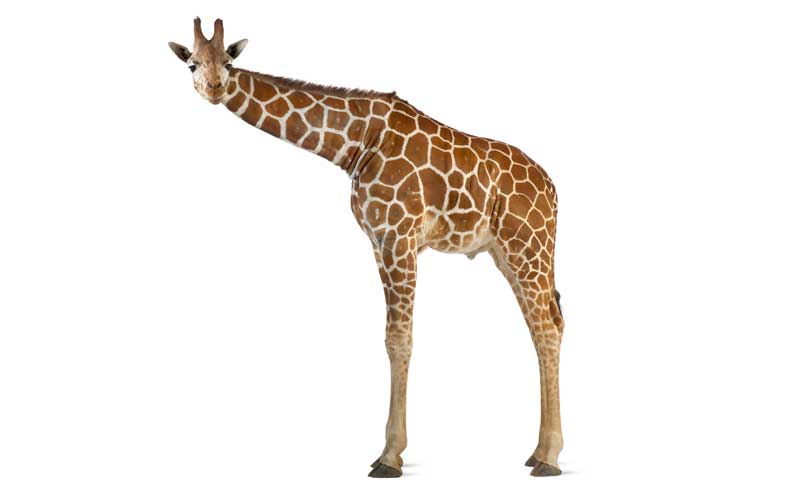 Almost all of Reticulated Giraffes feed on leaves, twigs, and bark of trees just like all other species but the acacia tree makes up most of their diet. While other animals can’t consume acacia leaves due to the thorns on them, all giraffes have very thick lips and tongues so they can eat this tree without any problems at all. They will consume up to 75 pounds of food a day and spend many hours a day eating.

In the savanna, they have some options to feed themselves, and they have no competition when it comes to obtaining or reaching food because their height allows them to rip the leaves from the tree tops, areas inaccessible to the vast majority of animals.

While they prefer the leaves of Acacia, they also consume clovers, leaves, shoots, fruits, and seeds of the Terminalia and Commiphora trees. Zoos feed these giraffes with alfalfa, sweet potatoes, apples, grains, carrots, and vegetation.

The leaves provide them a lot of water, so they do not require to drink frequently. They can survive without water for a few days or even a few weeks.

They live in shifting herds of up to 40 members but commonly composed of fewer members. They can leave the group when they have individual needs, and another can join it at any time. The females tend to stick to themselves in a group with the males only interacting with them when they would like to take part in mating.

What is interesting though is that the structure of their herds can change frequently. Some have been noted to be well balanced with males and females. Others are all male or all female for periods of time which is a different behavior than other species of giraffes.

They are not territorial, but the males prove their supremacy, especially during the breeding seasons.

Often birds sit on the backs of giraffes close to their tails, and there is a reason for it. These birds help to take care of the problem with flies that even the thick tails of the giraffe can’t fully contain. They also eat mites and other types of parasites from the skin of these giraffes, and that helps to keep them healthy.

They give off a strong odor that permeates through their home range, and they don’t seem to care for other animals around that won’t be competing for the same food sources.

The females reach their sexual maturity at a younger age than the males, achieving it at four or five years while the latter at eight or ten. However, it could end up being much later than that before they can successfully be powerful enough in the neck battles against other males to be able to win that right.

The fights with the necks are part of the sexual selection of the giraffes. There are aggressive battles where the necks are the primary weapons, and they hit each other with the head and neck to measure the strength and establish domination. The one who stands firm is the winner and has the right to mate with the female. Some scientists point out that winners are the ones with the longest neck, which gives them a greater height.

These giraffes can mate any time of year, but most of it occurs during the rainy season when food is plentiful. When breeding, males are mounted on the back of females as most terrestrial mammals do. The gestation period lasts 15 months and gives birth to a single calf. Births occur at any part of the year but are more frequent during the dry season. A mother can have a maximum of eight offspring during her entire life. 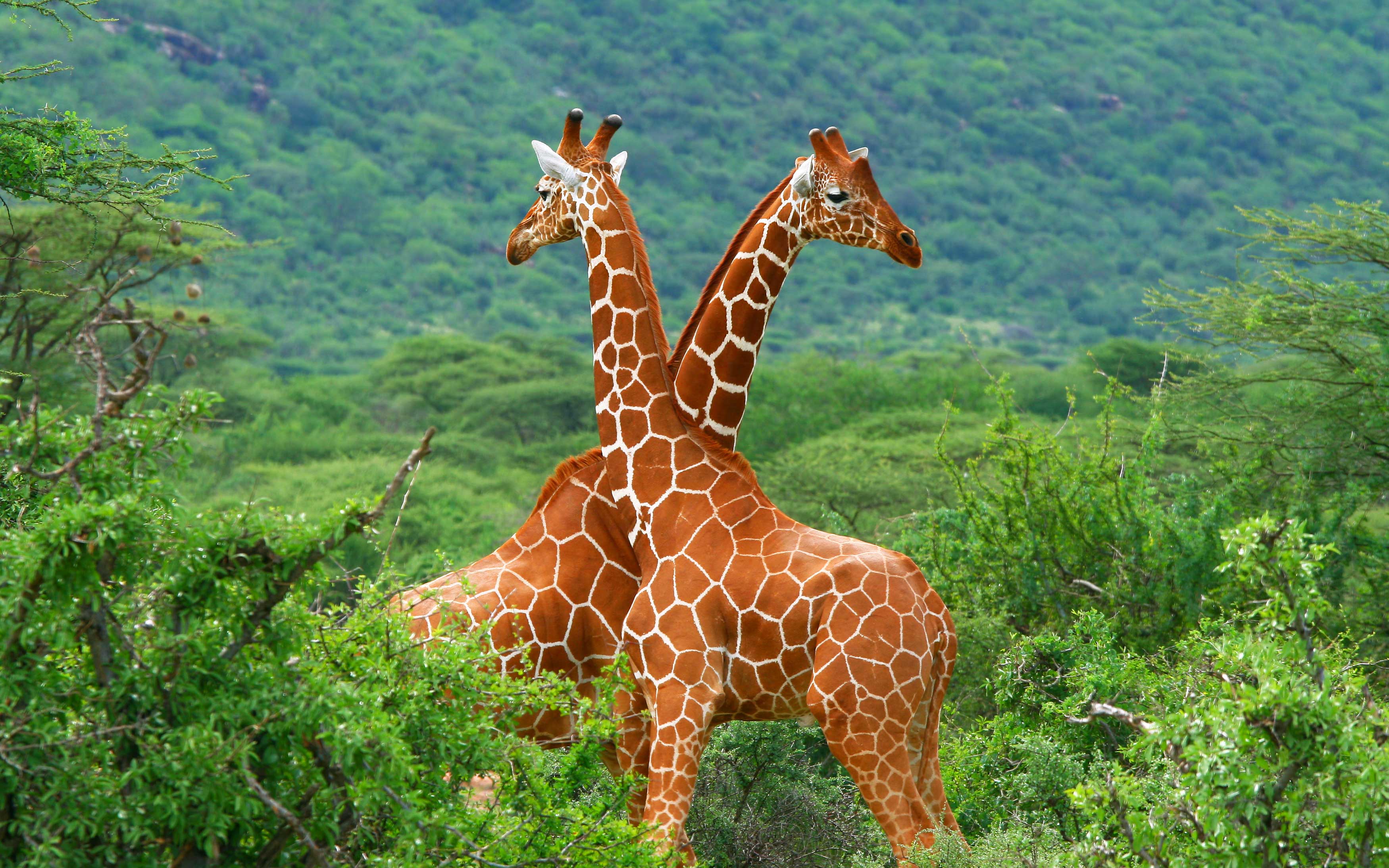 Two reticulated giraffes are fighting in the Samburu National Reserve.

The calves born weighing about 200 pounds and fall to the ground from a height of almost 6 feet when they leave the mother and can walk in just 20 or 30 minutes. They grow very fast during their first year, which gives them an advantage over their predators.

The mothers keep their young from the rest of the herd for about a month so that it can get the rest it needs. After that, they may work as a team with other females to care for the young and to protect them.

The first days the calves drink milk and hide behind their mother’s legs for protection. From 12 to 16 months calves are very well protected by their mothers who assist them to reach food, but after that time they begin to be more independent and start to feed and defend themselves.

A mother can be very aggressive when it comes to protecting their offspring. They are excellent caregivers, but due to their need to feed regularly, it can be hard for them to keep a good eye on the young. Even more, they need to eat more than usual so that they can create enough milk to nourish their offspring.

This particular species of giraffe is believed to have evolved million years ago into a separate species. However, they are closely related to a species that may have become extinct more than 20 million years ago. All giraffe species are related to deer and okapis.

Darwin stated that the evolution of the giraffes is responsible for their growing necks but others believe it could be that the neck size and power developed to help with making them more attractive for mating.

Adult reticulated giraffes very seldom have problems with predators. They have a keen sense of smell and can see for miles away. They are aware of danger often before it can become a serious threat to them. The impressive size of an adult Reticulated Giraffe is something most predators want to avoid.

Although adults do not have many natural enemies, they are the target of crocodiles and other predators when they bend to drink water. However, the offspring are the most vulnerable to being caught by expert carnivorous hunters, especially when they approach the rivers, sleep or walk away from the mother. They are often victims of lions, leopards, and other predators. The mortality rate in the first year of life is more than 50% for those in the wild. Sometimes injured or sick adults become prey for them as well.

Parasites and diseases are also threats to reticulated giraffes. The tsetse fly has 23 species that carry diseases and can end the lives of giraffes. It is the same type of fly that causes human sleeping sickness, which is also fatal in some cases if not treated properly.

While all those predators are a dangerous threat to reticulated giraffes, none of them is as ruthless as humans. Poachers use the tail and skin to make bracelets, fly swatches and shoelaces. Also in some African countries, a giraffe meat supports several families. The conservation status of the reticulated giraffe is “Vulnerable” according to the Red List of the International Union for the Conservation of Nature (IUCN).

Besides poaching, many villagers hunt these animals for the large amounts of meat they provide. 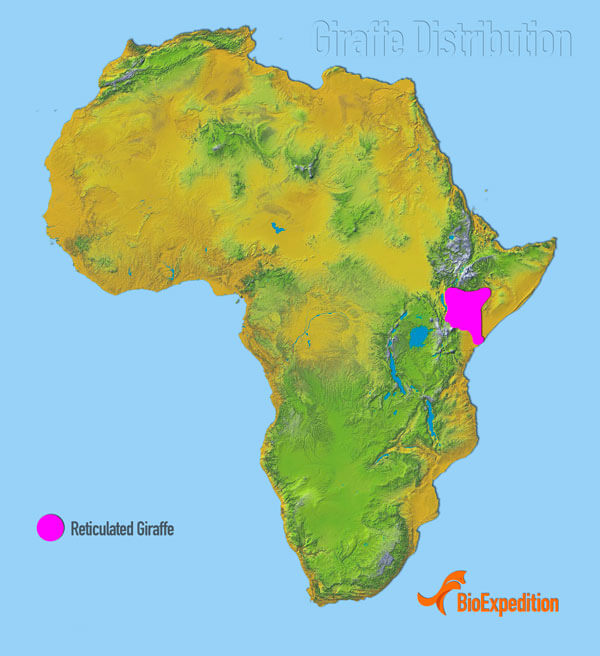