Photo by Hans Hillewaert. This file is licensed under the Creative Commons Attribution-Share Alike 3.0 Unported license.

The Southern Giraffe is an ungulate mammal of the order Artiodactyla and the family Giraffidae. It was described initially and named with the binomial Camelopardalis giraffa by the German naturalist and zoologist Johann Christian Daniel von Schreber in 1784. Shortly after that, in 1785, the Dutch physician and naturalist Pieter Boddaert gave the name Giraffa giraffa to this species. Although other researchers tried to assign different scientific names, finally this one became the official.

In general, southern giraffes have dark patches, rounded and irregular in a reddish-brown color. Unlike other species that have a faded color in their legs, this giraffe keeps the spots all over the limbs, although they become smaller as they get closer to the feet.

The Angolan giraffe subspecies has large brown spots with an angular shape that reach down to the legs. At the top, they do not reach the forehead. It has a white patch in the ear that can serve as a distinctive feature among both subspecies.

They have a small but pronounced hump on the back by the end of the mane and a neck formed by seven vertebrae, approximately 8-10 inches each. They also have the peculiar and strange horns called ossicones, which are in part some of the sexual dimorphism characteristics of each gender as those of females are smaller and with more hair than those of males.

The Angolan subspecies also known as Namibian giraffe inhabits in the north of Namibia, the southwest of Zambia, as well as in Botswana and western Zimbabwe. Despite its name, it is extinct of Angola. The latest census of 2016 estimated a population of 17,551 individuals in the wild (Fennessy, J.).

The South African subspecies inhabits the north of South Africa, southwestern Namibia, and Zambia, southern Botswana and Zimbabwe. Due to their disappearance of several places by the illegal hunting, the conservation groups reintroduced some individuals in several locations at the south of the African continent like Swaziland, and there are efforts of reintroduction in Mozambique. According to the 2016 census, there are approximately 21,287 South African giraffes from South Africa (Deacon et al. 2016). 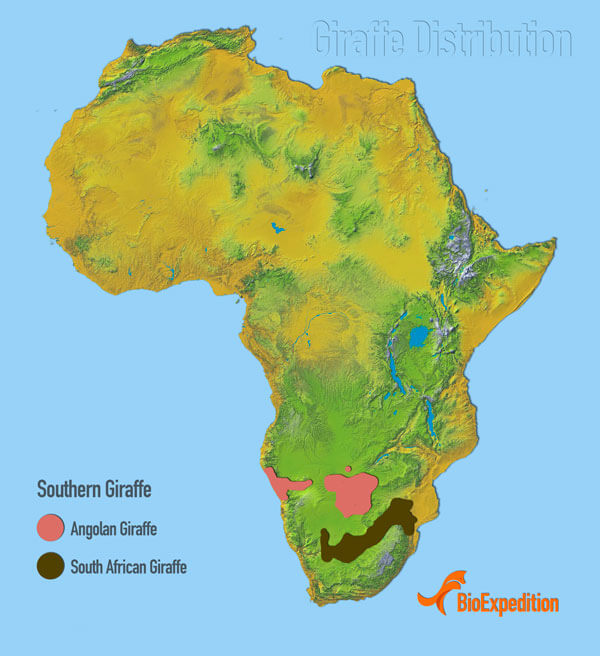 There are some protected areas where both species live protected, but also outside them, the danger increases as they are at the reach of poachers.

Its habitat is made up of savannas, bushes, and forests with varieties of vegetation. Botswana is a semi-arid country with hot summers that has average temperatures of 26 degrees Celsius and during the dry season winds last from April to October in the south and only during November in the north.

Zimbabwe, another of the places with significant numbers of southern giraffes, presents many variations between its warm and arid climate. The rainy season is from late October to March and droughts are recurrent.

As herbivorous animals, they feed on leaves, flowers, fruits and shoots of woody plants. Among the flowers and shrubs that exist in their natural habitat is common to find hibiscus, different types of lilies and Dombeya, but giraffes prefer acacia, a very broad genus of thorny trees and shrubs that grow abundantly in Africa and Australia. Besides the implicit nutrition, the leaves of this genus of plants provide them with large amounts of water, which is why they can spend a lot of time without drinking.

They dedicate much of their day to feeding since they chew slowly and must cover with their saliva the large spines of the acacias to avoid any damage in their organism.

In captivity, fresh leaves of acacia, hay, starch, carrots and cookies with high fiber contents are usually their food. Like all species, the southern giraffes are also ruminants and have a stomach with four chambers or compartments that aid in the process of regurgitation and digestion. 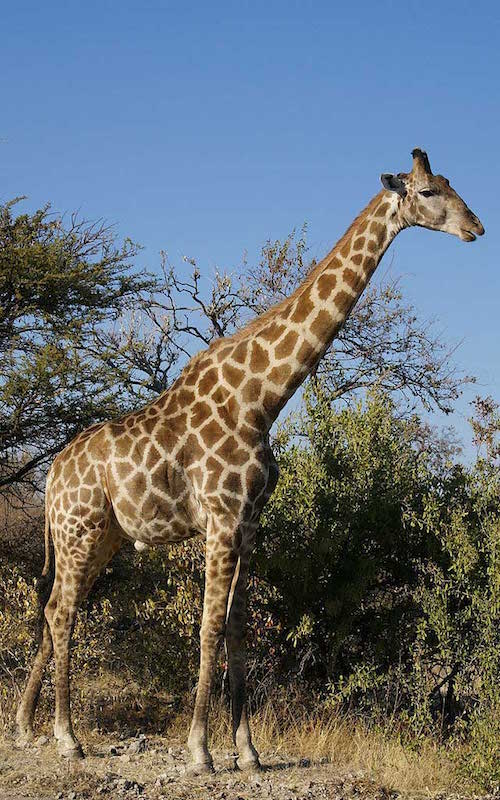 The males have to fight to establish domination, and the winners have greater reproductive success than the rest. Their confrontations are neck to neck battles called “necking” where they decide who will earn the right to mate. They measure the sexual receptivity of females by smelling and testing their urine, which determines who would be a better sexual partner.

The young are about 1.70 meters at birth and walk within a few hours of knowing their new habitat. Mothers are very protective of their offspring and maintain strong bonds generally until the next birth.

Females mature at four years on average, while males do so at the age of five, although they do not have the opportunity to mate until they are seven years old, which is when they have the strength and size to fight with other peers and have access to a female.

The natural threats of the southern giraffes are the carnivores around that represent a danger not only to them but also to all the different types of herbivores of Africa. Among these are the leopards, hyenas and wild dogs of South Africa. The latter two can knock down adults when they attack as a coordinated herd.

Crocodiles usually hide in muddy waters to surprisingly attack when giraffes are inclined to drink water. In such a position, its neck is almost at the level of the ground, which facilitates its capture and drag, especially with the young and offspring.

Some authors, do not consider the southern giraffe a threatened species because of the increase of its population thanks to the conservation efforts, but for others, the numbers are still under the expectations and encourage to keep the work before considering them out of danger.

As in all other species and subspecies, illegal hunting and the destruction of their habitat are the main causes of the population reduction. Sites such as the Etosha National Park in Namibia are home to Angolan giraffes besides other endangered animals, which contributes to preservation issues, but not all parks and reserves have the same surveillance. Huge extensions of land can hardly be guarded 24 hours a day, especially because of the high costs of air and ground transport, which benefits poachers who live off these illicit activities.