Photo by Roland H. This file is licensed under the Creative Commons Attribution-Share Alike 2.0 Generic license.

The West African giraffe also known as Nigerian giraffe is a subspecies of the Northern giraffe according to the new taxonomy defined in 2016 as result of the genetic research.

Unfortunately, this subspecies is one of the most threatened, with a conservation status as “Endangered” and around 400 individuals left in the wild.

This giraffe measures between 16 and 19 feet height and has a weight of up to 2800 pounds. The males weigh more than the females when they are full grown. However, it can still be hard to tell them apart.

One way you to identify the genders of the West African Giraffes is by viewing the ossicones. The ones of males are very thick, usually bald and are about five inches long. Those of females are smaller, thinner, and with hair on them.

The spots on the West African giraffe are much lighter than those of the other species. Its coat has spots with different shapes and sizes with a large separation between them, being more distant in the patches at the height of the neck and less separated in the rest of the body. These spots are light brown, and the background skin color is cream.

The face of the West African giraffe has a forehead with very few dark spots, a distinctive feature that makes it easier to identify. If you observe another subspecies you will note that the upper part of the face and in the middle of the eyes the color is dark brown, but in the case of the “Giraffa camelopardalis peralta” is not, as there has a very light brown color and cream.

As with any species of giraffe, it is hard to miss the very long neck that spans many feet. Watching them walk is interesting as their anatomy makes giraffes walk moving both legs on the same side of the body at the same time. However, when they gallop, they do it in the traditional way.

In spite of their enormous size, these animals can run very fast when they need to. When fleeing from predators they can reach a speed up to 35 miles per hour for a short time.

The hearing, smelling, and vision senses are all excellent for the West African Giraffes. They can see predators that are far away as well as to smell them.

It is believed these giraffes evolved from animals that look very similar to the deer we know today. The debate that continues is the development of their amazing necks. Did that occur for evolution purposes so that they could feed on locations in trees that other animals couldn’t? Some think they did, but some others that it was because of reproductive reasons.

This giraffe live in forests and open plains of the African continent. Before World War I, they inhabited many parts of West Africa, but their populations declined dramatically, living today only in a small region.

The West African giraffe has now a very reduced distribution range which only includes parts of Niger although the same populations sometimes move to areas in Mali. However, by the beginning of the 20th century, this species of giraffe lived in Niger, Chad, Cameroon, Nigeria, and Mali.

The West African Giraffe dwells in a variety of habitats including shrublands, savannas, and areas of the dense forest. As long as they can find food and water, any location out there can become a temporary habitat for them.

Like all giraffes, they can live in a hot climate where dry pastures and trees like acacia are common. Depending on the season, the Nigerian savanna has shortages in the food and water available due to droughts, so giraffes and other animals have to migrate to places where they can meet their basic needs.

In general, Nigeria is a hot country with a very humid atmosphere and with rains that are very intense on the coasts, that decrease in the regions towards the interior.

These Giraffes live in herds of about 15 members. They are social animals that seem to be a huge part of their life from birth until death.

Giraffes use snorting and moaning to interact with each other, and they make loud sounds to warn of impending danger. They are very affectionate towards each other and can be seen rubbing heads.

The males fight for leadership roles as well as for the right to mate.

Other plant-eating animals are often close to giraffes because they view the giraffe as a safe location. Since giraffes are tall, they can see what other animals can’t with their great vision and smell they can warn other animals of predators that may be in the area. 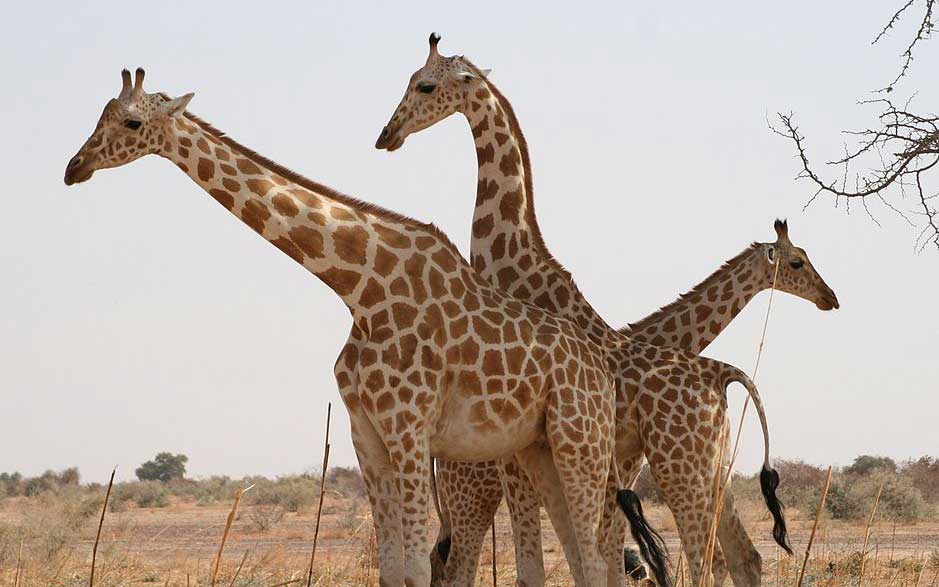 These giraffes consume significant amounts of plants. They are nomadic, continually moving around for food instead of being territorial and protecting a given location. They feed on the tops of the trees where other animals simply can’t reach, but they do not deplete a particular area of all food before moving on so the vegetation there can grow again and they will be able to return to the same place in the future to eat again.

Their food includes several types of leaves and shoots, but their favorite food is the leaves of the acacia tree. They are more selective with the vegetation they eat, taking only that of the trees and shrubs they like. They take their time to chew and swallow slowly.

They can eat leaves from these thorny trees that most other animals couldn’t because of the thickness of their tongues, throat, and saliva. They have a four-chamber stomach that allows them to process their daily intake of food.

They obtain a large quantity of water from the vegetation they consume to keep themselves hydrated in the harsh climate in which they inhabit. In the driest months, they drink a few times a week, managing to ingest up to 10 gallons in a few minutes. It is fascinating to watch them drink because they have to spread their legs out to distribute the weight and then incline their long necks forward but this is a vulnerable position for them.

Even though the West African Giraffes are ready to mate at around five years of age, most of them are at least seven years old before they do so. For the males, it can be even later as they have to fight with other bulls to earn the right for mating. They will perform a ritual called necking where they swing their necks at each other until one walks away. The one remaining is the one that can earn the right for mating. You have to keep in mind that for an adult giraffe the neck can weigh about 500 pounds.

The gestation period for the West African Giraffe is 15 months. A single birth is almost always the case. The young are about 6 feet tall, weigh about 150 pounds, and they can walk a couple of hours after their birth.

The females of a herd work as a team and take care of the offspring creating nurseries for them so that the female adults can take turns eating. The young consume milk from their mother’s for about the first year of life. During the later part of that time, they will begin to eat from shrubs and small trees they can reach.

In the natural habitat, the major threats are the hyenas, African wild dogs, leopards, and lions. The offspring are easy prey for them even if they are accompanied by the mother because groups of these carnivores hunting organized are almost impossible to overcome their simultaneous attack on various parts of the body. Only about half of young giraffes reach adulthood though due to the predators.

However, all predators giraffes know that a kick from such a powerful animal can crush their skull instantly. The time when these animals are the most vulnerable is when they are drinking because predators can grab them by the neck in that position, which is why they often drink in shifts.

There are no specimens in captivity. What were believed to be Nigerian giraffes turned out to be giraffes of Kordofan (Giraffa camelopardalis antiquorum) according to the new taxonomic classification of 2016, so there are around 400 individuals in the wild, which is why their conservation status is at significant risk.

As the last hope to their dangerous situation, the last giraffes in the wild are under continuous monitoring. Areas that were devastated by agricultural activities and subsequently abandoned are also under reforestation to give them back a larger habitat.

During the 1990s, a project to combat desertification was developed to regulate the activities of the timber industries, which were cutting vast hectares of natural areas, putting the survival of hundreds of species at risk. Thanks to this movement the population of the West African giraffes of 50 individuals in that time increased, until the 400 mentioned before. This program is a great progress but not to guarantee the future of this subspecies. Conservation efforts are not an easy task, but hopefully, all these actions and contributions will help these giraffes to survive.