Why Do Giraffes Have Such a Long Neck?

THE NECK OF THE GIRAFFES: A QUESTION OF FOOD OR SEXUALITY?

For decades we have heard the story of how the celebrated author of The Origin of Species refuted the theory of the French scientist who explained the length of the giraffe’s neck as a result of anatomical changes over several generations in an attempt to reach the leaves of the tallest trees. But things have changed, studies have multiplied, and a hypothesis has appeared now that refutes Darwin and suggests that the long neck of the giraffes is due to sexual selection and not to a food adaptation.

The reason for the neck length of these ungulates has taken off sleep from the scientists for a long time. According to the Darwinian explanation, among the giraffes that existed millions of years ago, there were some that had a longer neck than others. Since they could easily reach the leaves of higher trees in habitats where there was much competition for low vegetation, could be better adapted, reproduced successfully and transmitted their genes, so that shorter neck had no chance to thrive.

But then, why there are not other species in the same habitat with elongated necks? It’s just one of the many questions that remain on the air. And is that, unlike what some believe, giraffes have no more bones in their neck, but the same number of a human: seven. The difference is that each of them is longer.

This hypothesis is the sexual selection, formulated by zoologists Robert Simmons and Lue Scheepers in 1996 which follows from the Darwinian theory, only that the food factor changes to the sexual.

As we know, the animals have some adaptations to attract the attention of the opposite sex, and in most species, the males are ones that show off colorful plumage, imposing heights, large antlers or colorful coats that unfold during the courtship. In the case of giraffes, males certainly have a slightly longer neck than females, and use it to set battles as a prelude to approaching a mating prospect. The giraffe with the most “powerful” neck, has the right to mate.

It’s not just a light contact. Giraffes fight neck to neck, swing violently, and bump their heads to the chest, ribs, flanks and even legs, intimidating, wounding and sometimes killing. Usually, the strongest, largest and most sturdy giraffe is the one who wins the battle and also the opportunity to secure their offspring. Besides, it seems that females tend to prefer larger males. Here the question is size, strength, and appearance.

We cannot yet be sure that the hypothesis of sexual selection is the only reason for the elongated neck of the giraffes, but some circumstances support it. For example, those with a longer neck have a higher hierarchical rank, that is, they dominate the other males, and statistically mate more often. This feature may have allowed, that the giraffes with the longest neck and with the greatest reproductive success transmitted their genes to their offspring and that the characteristic perpetuated through time.

If this were the case, the idea that the elongation would occur because the larger ones were allowed to reach high foods, as an evolutionary advantage, would be discarded. 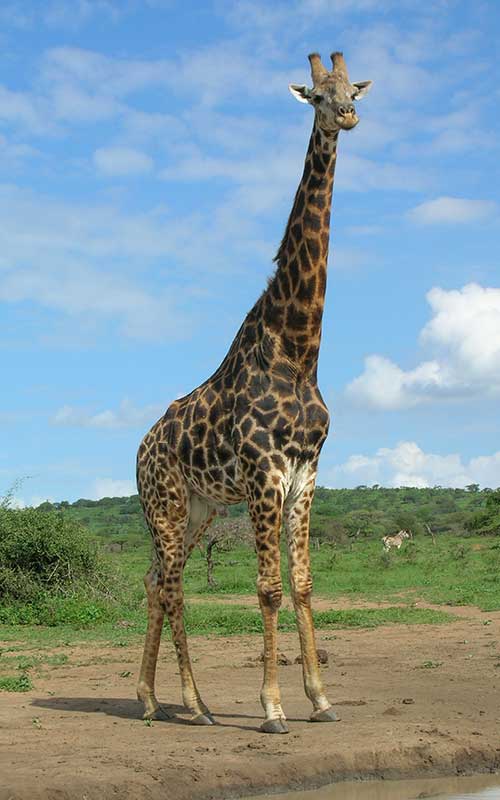 But that has not happened, of course. There are still many questions that prevent the hypothesis of Simmons and Scheepers from being completely accepted, such as why females also have a long neck? It is clear that the need for dominance of males on females favors them in length, but the fact that they also show a long neck creates doubts about this theory.

The point is that it is a matter of species and not gender. In fact, it seems that females accumulate more mass in their neck than males. The authors’ hypothesis has received many criticisms, of course, and the scientific community has not yet solved the issue.

The puzzle requires many pieces more. Perhaps many years and many studies are necessary to understand it, although it is possible that it is not only a factor that motivated the length of the neck of the giraffes.